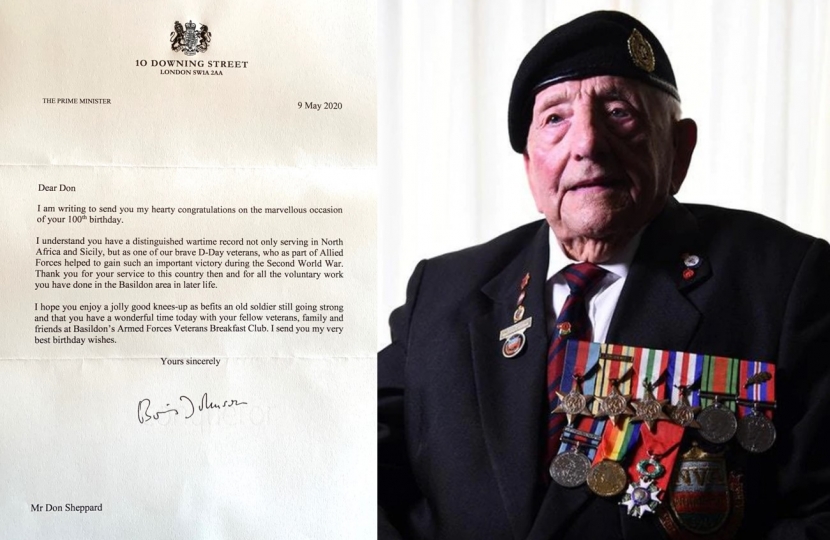 D-Day veteran Don Sheppard, took part in the Normandy landings, the North African campaign against Rommel, the tough battles through Sicily and D-Day in support of the Canadians at Juno Beach. Later in life he has played active roles in supporting his local community of Basildon as well as through the Royal British Legion. He was awarded the Freedom of the Borough last year, the highest award that Basildon Council can give on behalf of its residents to distinguished citizens.

Stephen Metcalfe was due to present Dom Sheppard with the letter from Boris Johnson, written before the Covid-19 crisis, at a special celebration at Basildon’s Armed Forces Veterans Breakfast Club on 9th May.

The Prime Minister wrote: “Dear Don, I am writing to send you my heartfelt congratulations on the marvellous occasion of your 100th birthday.

“I understand you have a distinguished wartime record not only serving in North Africa and Sicily, but as one of our brave D-Day veterans, who as part of Allied Forces helped to gain such an important victory during the Second World War.

“Thank you for your service to this country then and for all the voluntary work you have done in the Basildon area in later life.

“I hope you enjoy a jolly good knees-up as befits an old soldier still going strong. I send you my very best birthday wishes.

Stephen Metcalfe said: “Congratulations Don on reaching your 100th birthday. I am genuinely sorry that I will not be able to congratulate you on this fantastic achievement in person as had been planned.

“From your service during the Second World War, including your involvement on D-Day, to latterly all you have done to support our local community, you stand as an inspiration to us all on what can be achieved through steadfast commitment to the area in which you live and your country.

“As you reach this significant milestone, I hope that you will be able to raise a glass and reflect on what has gone before, while looking forward to a brighter future when we can all socialise and meet up again with friends and family.

With members of the public no longer able to attend VE Day 75 events, Stephen Metcalfe MP has also invited constituents to get involved from home throughout the day and pay tribute to the entire Second World War generation.

The Royal British Legion has announced a programme of activity for the day alongside a host of home activities and learning resources for children and adults that can be accessed online.

In addition to observing the Two Minute Silence at 11am, families are encouraged to utilise the digital toolkit produced by the Government to make posters for window displays.

Celebrations of the Second World War generation will start at 8pm on BBC One. Members of the public are invited to take part in a UK-wide rendition of Vera Lynn’s ‘We’ll Meet Again’ at 9pm.

The Royal British Legion is the nation's biggest Armed Forces charity providing care and support to all members of the British Armed Forces past and present and their families. The Legion champions Remembrance and safeguards the Military Covenant between the nation and its Armed Forces. It is well known for the annual Poppy Appeal, and its emblem the red poppy. www.britishlegion.org.uk