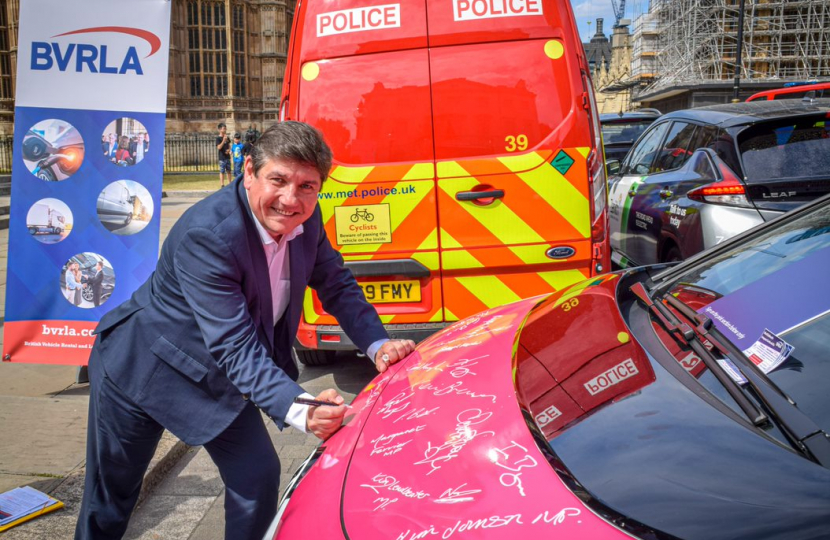 Stephen Metcalfe, MP for South Basildon & East Thurrock, is urging the Chancellor to support the uptake of electric cars by keeping Benefit-in-Kind (BiK) rates low and giving foresight beyond the current 2024/25 cut off.

Stephen met a selection of industry experts from the British Vehicle Rental and Leasing Association (BVRLA), Octopus EV, Tusker, and Zenith at an event to highlight the positive outcomes that will come with more years of tax foresight, keeping BEV BiK rates low, and staggering any increases to avoid a sudden hike.

BiK rates are currently low for electric cars, allowing thousands of motorists to access an electric vehicle via company schemes such as salary sacrifice. However, beyond 2024/25 the rate at which this tax will be applied is yet unknown.

Stephen Metcalfe said: “While many people still find the price of an EV to be too high, salary sacrifice schemes are a vital route to accessing an affordable EV. Now more than ever it’s important as many people as possible are able to access the benefits of these vehicles such as cheaper running costs.

“I’m delighted to back the BVRLA’s #SeeTheBenefit campaign and am encouraging the Chancellor to act in the Autumn Budget. We need to ensure the future of these rates is clear and kept low so we can protect this vital route to EV adoption, which will assist in meeting our pledge to be net zero by 2050”.

BVRLA Chief Executive, Gerry Keaney said: “The strides we have made as an industry to phase-out petrol and diesel cars before 2030 are clear, nearly 60% of electric vehicles on UK roads are company registered. Order banks are currently healthy, with 80% of salary sacrifice orders being for battery electric vehicles as their low tax rates appeal to drivers. The uncertainty caused by the lack of foresight beyond 2024/25, or by seeing a sudden jump in rates, could cause the growth of EVs to stall.”

Full details of the campaign can be found on the BVRLA website.