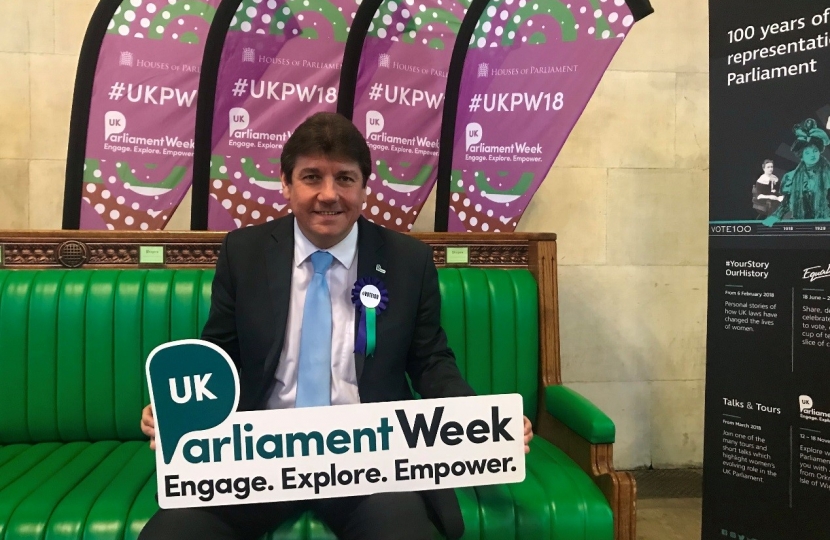 As we mark 100 years since the first women gained the right to vote, Stephen Metcalfe MP is inviting everyone in South Basildon and East Thurrock to get involved in UK Parliament Week and play a part in our thriving democracy.

UK Parliament Week is a UK-wide festival taking place from 12-18 November, which aims to engage people, especially young people, from different backgrounds and communities, with the UK Parliament and empower them to get involved.

UK Parliament Week is part of the UK Parliament’s Vote 100 programme, celebrating equal voting rights and other milestones in the UK’s democratic history. A record high of 32% women MPs were elected to the House of Commons in 2017’s General Election. There is further to go in encouraging diversity; UK Parliament invites people of all backgrounds to have a say in their democracy.

Other centenaries coming up this year include the Parliament (Qualification of Women) Act which gave women over 21 the right to stand for election as an MP (21 November) and the 1918 General Election when women over 30 and all men over 21 voted for the first time (14 December).

Stephen said: “This year marks 100 years since some women got the chance to vote for the very first time. As a democrat first and foremost, I am determined to ensure that our voters and citizens of tomorrow understand how vital their participation is in our democracy. I’m excited to see so many schools, Girlguides, Scouts and local groups taking part.”

David Clark, Head of Education and Engagement at UK Parliament, said: “There are many exciting events as part of this year’s UK Parliament Week, with many of those happening in Stephen Metcalfe’s constituency. Schools, workplaces and community groups have a chance to get involved in their democracy, and to also celebrate one of the most important centenaries in British democratic history. We can only work towards a more equal society if we all engage with democracy so please find ways to get involved”.

Find out more about this year’s UK Parliament Week here.

Free guided tours of Parliament are available to constituents. The walking tour of the Palace of Westminster includes -