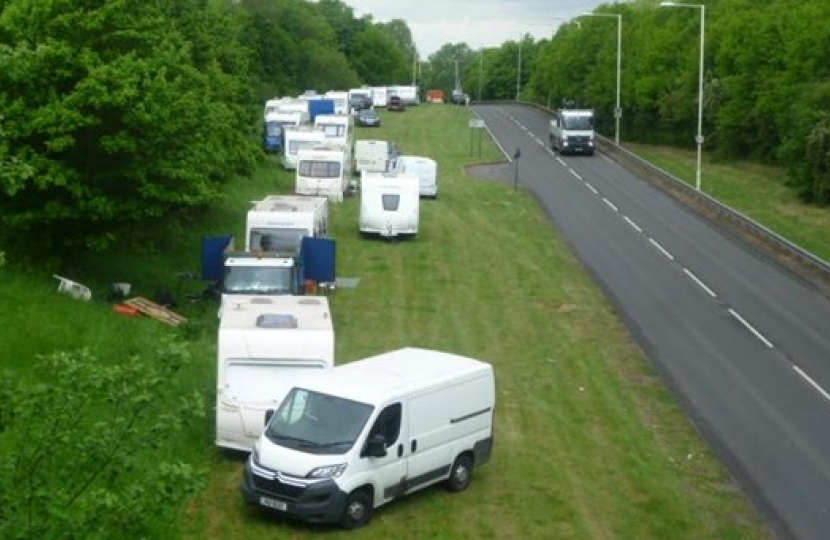 The Home Office will consult on: increased police powers to move travellers on from private or highway land to authorised land; increasing the period of time from which, once moved, travellers will be unable to return; lowering the number of vehicles needed before police intervention from 6 to 2; and the so-called ‘Irish Option’ of making intentional trespass a criminal offence.

Essex MPs Stephen Metcalfe, Mark Francois and John Baron called on the Government to give the ‘Irish Option’ serious consideration as part of a future review of police powers in a submission to the consultation into unauthorised encampments and a separate letter signed by 59 MPs last year.

On October 9 MPs took part in a general debate on Gypsies and Travellers and local communities in which Stephen Metcalfe seized the opportunity to strongly condemn illegal traveller encampments, speaking from experience of Marsh Farm in Vange. To watch his speech in the chamber click here.

“I welcome that Britain is home to a wide variety of cultures including the traveller groups, but crucially the same rules must apply to all members of society equally. This is why I called for the law to be strengthened to enable the police and councils to take swift action and evict illegal encampments.

The current powers available to the police and local authorities to tackle unauthorised encampments are cumbersome and costly. Councils and private landlords have too often paid thousands to correct the environmental damage left behind.

I am therefore delighted at the Home Office announcement to consult on a range of new police powers, including the ‘Irish Option’ of making intentional trespass a criminal offence. This will be a game-changer in the slow process that currently aggrieves my constituents.

I will continue to work with my South Essex colleagues to support this new policy direction to help end the unfairness of illegal traveller sites”.

Throughout the UK the way police and local authorities communicate and utilise the powers they have to deal with unauthorised encampments varies a great deal. The Government recognises this and that is why they issued the 2015 guidance to help strengthen the hand of authorities and ensure all communities are treated equally.

However, many councils across England feel very strongly that the use of the powers they have is cumbersome, costly and fails to enable communities to react quickly enough to prevent the environmental damage often associated with unauthorised encampments.

Problems derive from how powers are split between councils, as a planning issue, and the police, as a matter of trespass and public order. These are then compounded by different internal guidance circulating in each and a reluctance to act due to fear of entering encampments.

A recent House of Commons Debate on October 9 2018 (c77-134WH) saw MPs, such as Stephen Metcalfe, raise the inconsistencies across difference parts of the UK and its neighbour – the Republic of Ireland.

In 2002 Ireland changed the law to introduce a criminal offence of trespass into their Public Order Act. The ‘Irish option’ of criminalising deliberate acts of trespass could give powers of arrest without warrant for any offence under the act – strengthening the hand of the police.

Stephen Metcalfe MP has stepped in to save the ‘Page Woods Pig’ which was abandoned in Page Woods, Basildon. Following his intervention, the RSCPA will soon take over care for the pig which currently resides in Bowers Gifford, Basildon.