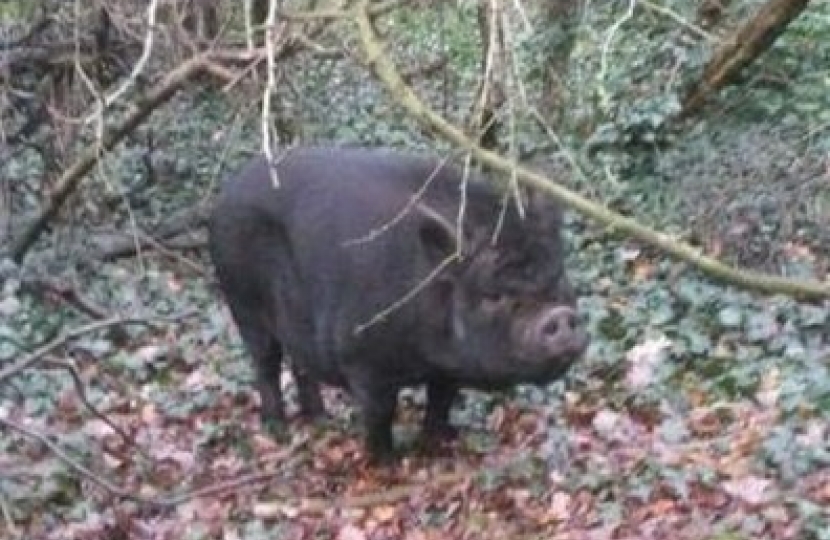 Stephen Metcalfe MP has stepped in to save the ‘Page Woods Pig’ which was abandoned in Page Woods, Basildon. Following his intervention, the RSCPA will soon take over care for the pig which currently resides in Bowers Gifford, Basildon.

‘Page Woods Piggy’ as she has locally become known, was believed to have been abandoned by its owners at the end of last year. The pig was spotted at Page Woods, where she was fed by local people and became a focus for dog walkers frequenting the woods.

Page Woods Trust Chairwoman, Rose Griffin, contacted Stephen Metcalfe after being unable to find a local sanctuary that had any space. Concern grew that, should a new home not be found, the pig may have to be culled due to strict disease prevention laws covering livestock.

The swine is currently in the care of a local man who took pity on the pig after she wandered into his family’s garden. The family are unable keep the pig due to the suitability of the garden and the cost of its feed but are being supported by the community in their efforts and have had donations to assist them in the temporary care of the pig.

Stephen Metcalfe said: “I am pleased to assist in helping secure the right help for this lost pig, which will soon be taken into the care of the RSPCA. Sadly, this tale is not uncommon with many homeowners buying ‘micropigs’ as pets without realising how large they will become in adulthood. I thank Rose Griffin for bringing the pig to my attention and the community for their generosity in assisting with its temporary care”.

I firmly believe in protecting both the UK's vibrant ecosystem and the natural environment worldwide. Environmental and economic progress are not just compatible: they depend on each other.