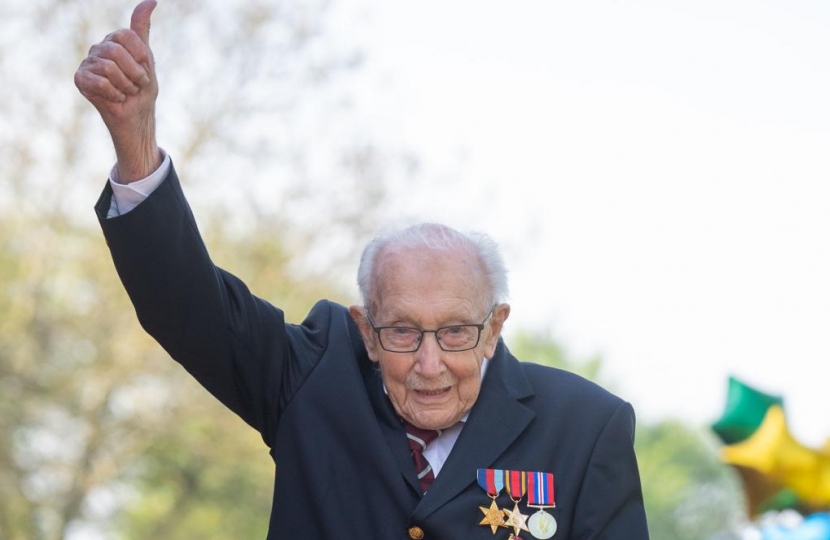 Stephen Metcalfe, MP for South Basildon & East Thurrock, thanks Captain Tom Moore on the occasion of his 100th Birthday for raising over £31 million for the NHS. He also invites constituents to mark the 75th anniversary of VE Day on Friday 8th May from home.

Friday 8th May marks the 75th anniversary of VE day. With members of the public no longer able to attend VE Day 75 events, Stephen Metcalfe MP invites constituents to get involved from home throughout the day and pay tribute to the entire Second World War generation from British, Commonwealth and Allied Forces, to evacuees and those who served on the home front.

The Royal British Legion has announced a programme of activity for the day alongside a host of home activities and learning resources for children and adults that can be accessed online.

In addition to observing the Two Minute Silence at 11am, families are encouraged to utilise the digital toolkit produced by the Government to make posters for window displays.

Celebrations of the Second World War generation will start at 8pm on BBC One. Members of the public are invited to enjoy a moment of celebration and thanksgiving during the programme by taking part in a UK-wide rendition of Vera Lynn’s ‘We’ll Meet Again’ at 9pm.

Stephen Metcalfe said: “There are striking parallels between the struggles of the Second World War and the Coronavirus pandemic. Just as then people came together to show collective resolve and determination, so to today during the greatest crisis of our generation we are showcasing the best of us.

“As we mark 75 years since Victory in Europe on the 8th of May, we look to our Second World War generation to learn from their experiences and for inspiration. One such veteran, Captain Tom Moore, has inspired our entire nation. To have set out to raise a £1000 for NHS charities was in itself a very commendable aim, but to have raised over £31 million demonstrates that whatever your age, with determination and commitment there is no limit to what can be achieved! I thank him and wish him a happy 100th birthday on behalf of everyone in the constituency.

“The Royal British Legion has put together a host of activities to mark the occasion alongside observing the Two Minute Silence at 11am. I would encourage families to utilise the online resources produced by the Legion and the Government to show our support and inspire our children”.

The Royal British Legion is the nation's biggest Armed Forces charity providing care and support to all members of the British Armed Forces past and present and their families. The Legion champions Remembrance and safeguards the Military Covenant between the nation and its Armed Forces. It is well known for the annual Poppy Appeal, and its emblem the red poppy. www.britishlegion.org.uk