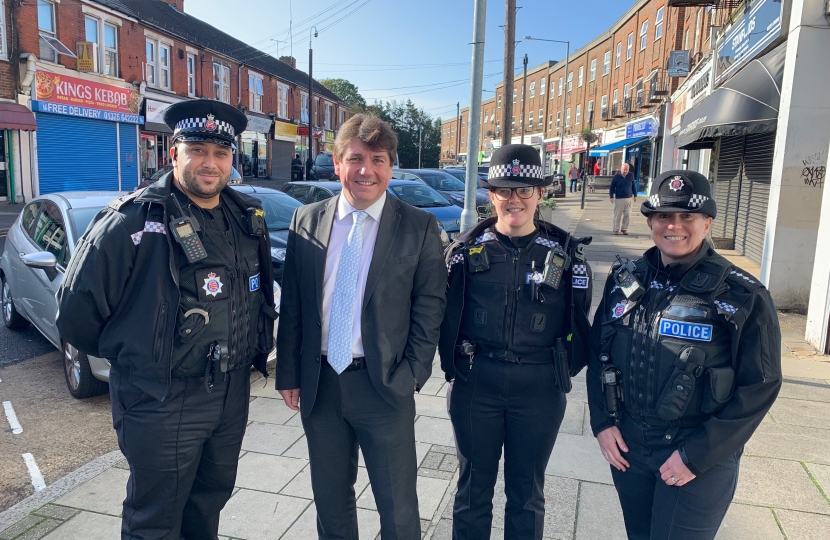 Stephen Metcalfe has welcomed the announcement of the biggest increase in Essex Police funding since 2010. Essex Police’s funding settlement for 2020/21 will be £23 million more than 2019/20, a huge increase of 7.2%. This settlement gives the police the investment they need to fulfil the Prime Minister’s promise to increase Police numbers. Essex Police will be able to recruit an additional 135 extra officers by March 2021.

The extra 135 officers will be in addition to the 368 extra officers currently being recruited as a result of the increase in the police precept and puts Essex Police well ahead of their recruitment targets.

This increase in the number of new officers, combined with more efficient operations, have allowed Essex Police to establish new community policing teams. They will work closely with local businesses and support groups to get to the root of ongoing community issues and tensions such as drug dealing and antisocial behaviour.

Alongside the 7.2% increase in funding for Essex Police, the Government will also invest in national policing priorities:

Police, Fire and Crime Commissioner for Essex, Roger Hirst said: “Essex Police are already well ahead of their recruitment target and with this additional funding the total number of Officers in Essex will reach at least 3353 by March 2021.”

“This is excellent news and further cements our commitment in the Police and Crime Plan to deliver more local, visible and accessible policing for the people of Essex. I will continue to work closely with Stephen Metcalfe MP and thank him for his support for Essex Police.”

Stephen Metcalfe said: “This generous funding settlement increase of up to 7.2% makes good on the Prime Minister’s promise to increase police numbers across Essex. This means 135 extra officers will be recruited for next year. Combined with the 368 officers that are currently being recruited by Essex Police it represents the largest boost to Essex Police numbers in more than a decade.”

“These additional Officers will make a real difference to people and communities across Basildon and Thurrock. I thank the Prime Minister for his commitment to increase Police ranks.”