Stephen Metcalfe MP Welcomes Over 500 Additional Police Officers To Essex With 300 More On The Way! 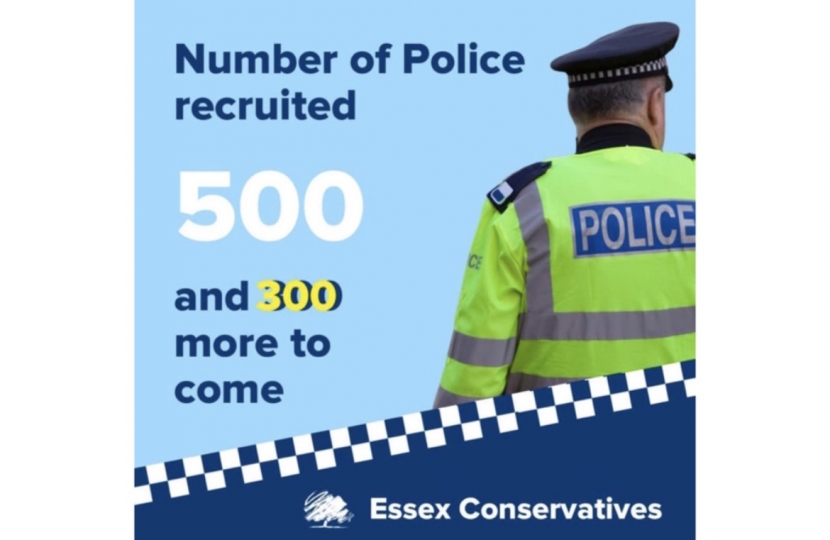 Stephen Metcalfe, MP for South Basildon & East Thurrock, has welcomed that an additional 500 police officers have been recruited in Essex.

This announcement falls within the first year of the Prime Minister’s campaign to recruit 20,000 police officers by March 2023. This figure is also part of the 8,771 additional officers that have been recruited across England and Wales.

This means the Conservative Government’s target of recruiting 6,000 by March 2021 in the first year of the programme has been exceeded, with the halfway milestone likely to be reached within the coming weeks.

The addition of these new officers brings the total number of police across Essex up to 3,493, meaning there are now more frontline officers on our streets to keep the public safe.  The new figures have also confirmed that every single force across England and Wales has met or exceeded their recruitment targets.

139,000 people have applied to join the police since the start of the recruitment programme.

On top of recruiting 20,000 additional police officers, the Conservative Government is supporting the police with the powers they need to crack down on crime, including through introducing the landmark Police, Crime, Sentencing and Courts Bill.

Commenting, Stephen Metcalfe MP said: “Getting more police officers onto our streets is one of the people’s priorities, therefore I am pleased to see that this Conservative Government has already delivered an extra 177 officers across Essex in addition to the additional officers recruited locally as part of the precept.

“Every one of these additional 500 officers will make a difference in helping to cut crime and keep people safe – and I know that many more will follow as this People’s Government continues to deliver on its promise to recruit 20,000 more over the next three years.

“By backing our police with the funding, powers and resources they need, we are keeping the public and our communities safe, so that people everywhere can live their lives free from the fear of crime.”

Home Secretary Priti Patel said: “As Home Secretary, keeping you, your family and our country safe is my number one priority. One of the Government’s key promises was to put an extra 20,000 police officers on our streets, and I’m delighted that one year in we have surpassed expectations and already recruited nearly 9,000 additional police officers.

“Our police officers are the very best of us and I will continue to give them the resources and powers they need to keep us and our loved ones safe. But I need local Police and Crime Commissioners to work with me to get crime down as we emerge from the pandemic, so I’d urge everyone to vote for their local Conservative candidate on Thursday 6th May.”

While cases are high and rising, everybody needs to continue to act carefully and remain cautious.

You should get a test and follow the stay at home guidance if you have COVID-19 symptoms.