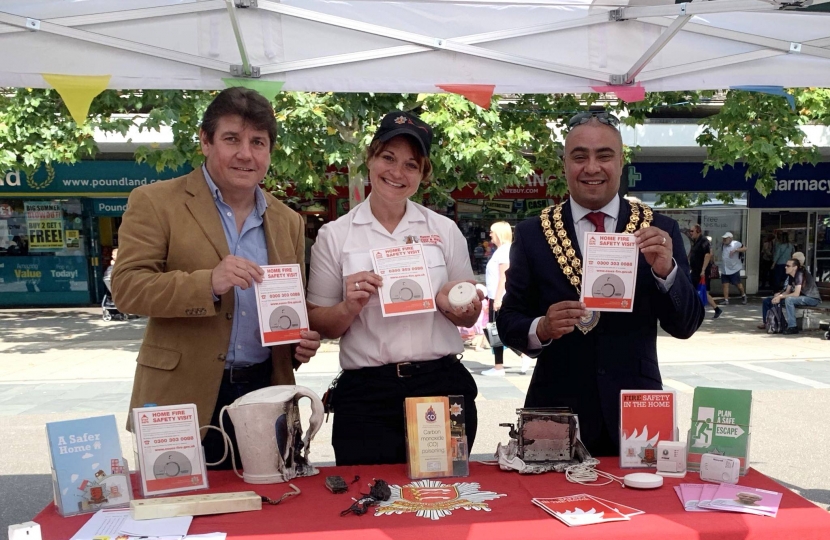 Stephen Metcalfe joined the Mayor of Basildon Borough, the Deputy Mayor of Ville de Meaux (France) and the Mayor of Heiligenhaus (Germany) in the Basildon town centre to celebrate Basildon’s 70th Anniversary on Saturday 31st August 2019.

An array of musicians, bands and performers took to multiple stages across various venues including the Towngate Theatre, St Martin’s Square, Eastgate Centre, Basildon Market and Basildon Library to honour the 70th Anniversary of the creation of Basildon.

Guests from the twinned towns of Heiligenhaus and Meaux, represented by the Mayor of Heiligenhaus Michael Beck and the Deputy Mayor of Meaux Laurent Guillaume, attended alongside guests who ran stalls. The towns share an affinity with Basildon having also been established or extended after World War Two to accommodate new homes and schools for displaced people and population growth.

Stephen Metcalfe said: “It is fantastic to see Basildon come alive with an array of musicians, bands and performers to honour the 70th anniversary of Basildon Borough. The stalls of our guests from France and Germany highlight just how successful and integral our twinned towns of Meaux and Heiligenhaus are to our rich, diverse heritage”.

The event also gave Essex Fire and Rescue Service the opportunity to showcase a range essential services they offer, including the installation of FREE smoke detectors.

Stephen Metcalfe said: “This is a fantastic opportunity: If you call 0300 303 0088 Essex Fire and Rescue will fit smoke detectors free of charge! Remember even if you already have them. Get them checked. They don’t last forever! A phone call could save your life!”