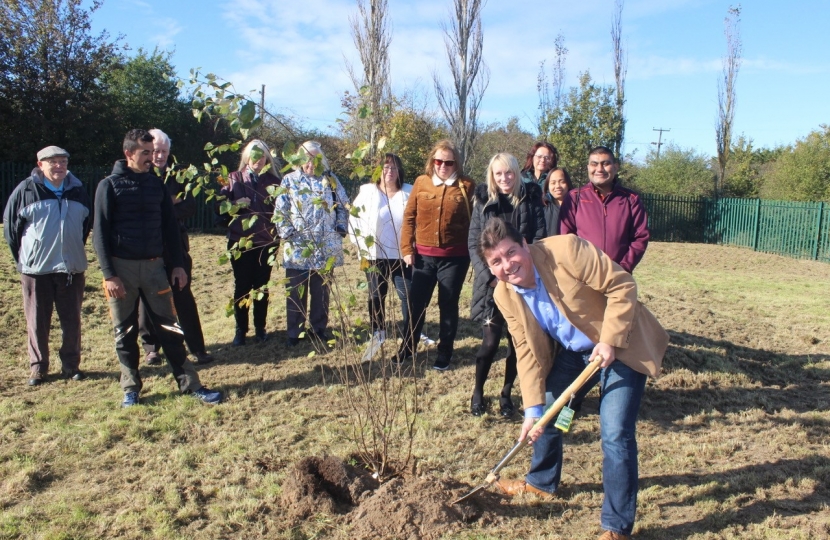 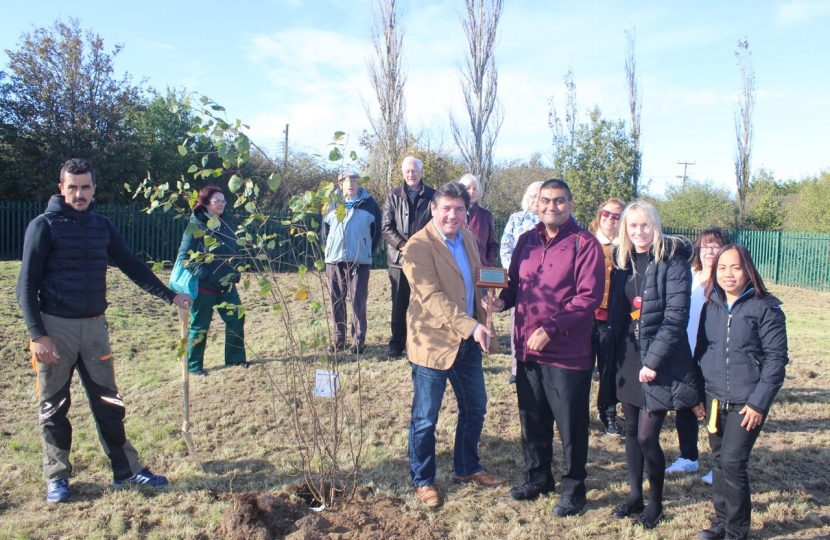 Stephen Metcalfe, MP for South Basildon & East Thurrock, joined over 500 other MPs to plant trees as part of the Queen’s Commonwealth Canopy, a network of forest conservation initiatives to mark Her Majesty's lifetime of service to the Commonwealth. (27/10/2018)

Stephen was joined by Danielle Allan, Sid Nazir & Janice Cosgrove of Pitsea Sainsburys at the entrance to Wat Tyler Park, Pitsea, Basildon SS16 4UH for the planting. Thanks to John Hillden  J.C of Tree Services for his assistance.

The trees were donated thanks to a partnership between the Woodland Trust, Sainsbury’s and ITV, which in April screened a landmark documentary, The Queen's Green Planet, following Her Majesty the Queen and this ambitious legacy project which brings together her deeply held commitment to the Commonwealth and her little-known love of trees.

At the heart of the film was a conversation between the Queen and Sir David Attenborough filmed in the gardens of Buckingham Palace last summer.  In a rare opportunity to see the Queen talking informally to Sir David, the conversation ranged from climate change, to conkers and of course trees, and was watched by 6.4 million viewers, making it ITV’s most watched factual programme of the year.

In support of the programme the Woodland Trust provided 50,000 trees for ITV viewers, and via the Rt Hon Frank Field MP, who conceived the QCC initiative, also offered a special commemorative pack to every MP in the UK.

Stephen said: “I was honoured to plant trees as part of the Queen’s Commonwealth Canopy on behalf of my constituents. Green spaces are an essential part of our landscape and a cherished part of our cultural identity. This international project will leave a considerable legacy to be proud of. I could not be happier to support the work of HRH and David Attenborough in helping forest the world one tree at a time.”

Woodland Trust Chief Executive Beccy Speight said: “We are delighted so many MPs have decided to join us in our bid to plant trees as part of the Queen’s Commonwealth Canopy.  We all need trees. They are crucial in improving soil health and water quality, reducing carbon, trapping pollutants, slowing the flow of flood water, sheltering livestock, providing a home for wildlife or a space for us to breathe. I hope the residents of Basildon and Thurrock will enjoy watching them flourish as part of this wonderful legacy initiative.”

Sainsbury’s CEO Mike Coupe said: “As the Woodland Trust’s largest corporate partner, we’re committed to raising awareness of the importance of the UK’s woods and trees, and contributing to their conservation.

I was lucky enough to grow up surrounded by woods, so trees have a particular resonance with me. Sainsbury’s recently planted its three millionth tree with the Trust, and the thought of being able to get so many more in the ground as part of the Queen’s Commonwealth Canopy with the support of so many MPs is an exciting prospect.”

I firmly believe in protecting both the UK's vibrant ecosystem and the natural environment worldwide. Environmental and economic progress are not just compatible: they depend on each other.